Peganum harmala is not listed specifically in the Schedules to the US Controlled Substances Act and is not mentioned anywhere on the Drug Enforcement Agency (DEA) website.  Therefore, Syrian Rue is uncontrolled as far as the DEA is concerned.  The US Department of Agriculture (USDA) may impose regulations at their discretion regardless of actual laws.  Notice that the USDA openly restricts Peganum Harmala in Arizona, California, Colorado, Nevada, New Mexico, and Oregon.  Below is a screenshot taken from the USDA website in September 2019 specifying the six US states where Peganum Harmala is regulated to prevent it becoming an invasive species. 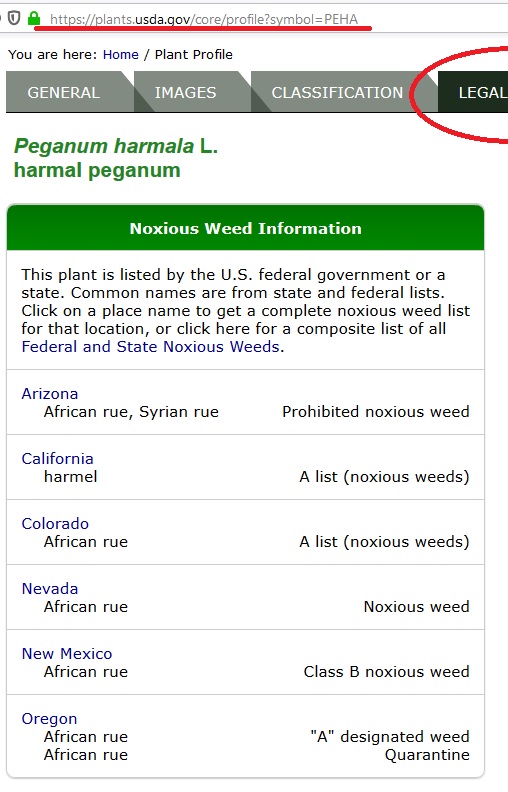 In practice the USDA may seize ANY international shipment of Peganum Harmala to ANY state – even where the plant is unregulated and uncontrolled.  Technically the USDA is violating US law by tampering with mail containing uncontrolled substances when that mail is destined for  states like North Carolina where there is no legal regulation of the plant. 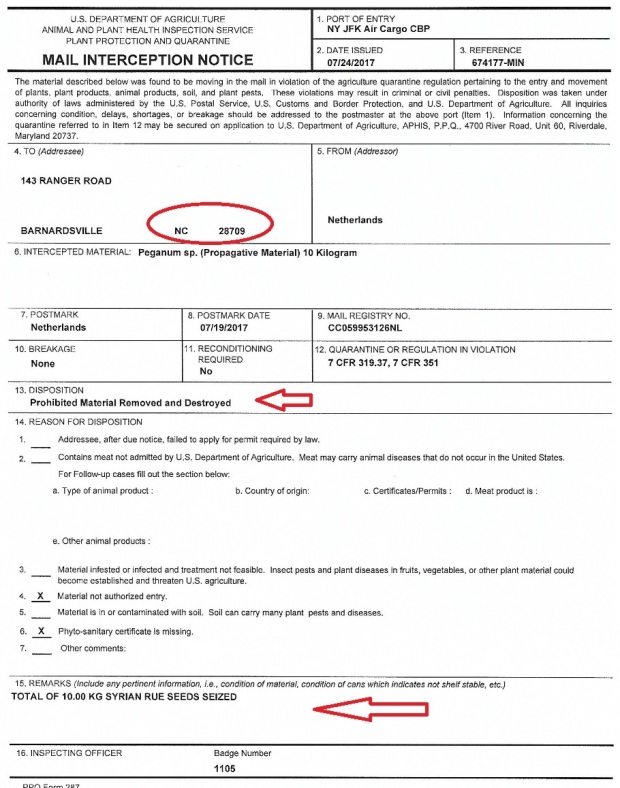 I contested this (illegal) confiscation of Syrian Rue with the USDA.  I showed them the information from their own website showing that I was in a region where Syrian Rue is unregulated.  The USDA said that they had destroyed the Syrian Rue seeds.  They had neither apology nor explanation for taking my mail. The USDA was not able to reimburse me for their error.  I reported the fraudulent business of the USDA to the Federal Trade Commission (FTC) who did respond to me and created an FTC reference number(89098449) to my claim against the USDA.

Conclusion:  In the United States the authorities may arbitrarily confiscate any package containing Syrian Rue, regardless of the actual laws.

In 2018, authorities in North Carolina confiscated my Syrian Rue and other plants then imprisoned me for a year because they found a tenth of a gram of DMT in my home and some solvent with a small amount of DMT in it.  Read more about it here:

Regarding DMT, i deemed it necessary to state that I AM ReDeemed – considering Federal sentencing guidelines for DMT recommend that 1 gram of DMT be punished equivalent to 100 grams of cannabis.  Now that cannabis is legal in many states, DMT ought to be punished lightly if even be punished at all… according to federal guidelines,  guidelines which are not regarded by the state or county authorities.

Peganum harmala is included under item 9 of Schedule III to the CDSA and is a controlled substance.

The Canadian Food Inspection Agency (CFIA) recommends regulating Peganum harmala as a quarantine pest under the Plant Protection Act, placing this species on the List of Pests Regulated by Canada and regulating the plant as a prohibited noxious weed under the Weed Seeds Order of the Seeds Act.

This measure will complement measures already in place under the CDSA to regulate Peganum harmala. It will further ensure that seeds of the plant are not allowed entry into Canada. Regulate as a quarantine pest under the Plant Protection Act. Add this species to the List of Pests Regulated by Canada (CFIA 2009) in order to:Further prevent the importation, movement, and cultivation of this species in Canada.

As of May 3, 2005,  Peganum harmala, harmine, harmaline, tetrahydroharmine (THH), haroml, and harmalol are on the list of controlled substances.